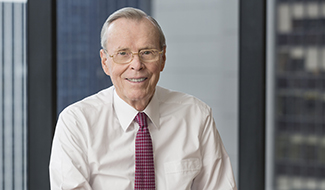 Donald B. Marron is the Chairman Emeritus and Founder of Lightyear Capital and a member of the Investment Committee.

Mr. Marron is a former Director of the New York Stock Exchange, former Governor and Vice Chairman of the Securities Industry Association, and former Governor of the National Association of Securities Dealers. He is Chairman Emeritus of the Center for the Study of the Presidency, a Trustee of New York University, a Trustee of the Center for Strategic and International Studies, and a member of Memorial Sloan-Kettering Cancer Center’s Board of Overseers and the Council on Foreign Relations. A collector of modern art, Mr. Marron is a Trustee and President Emeritus of the Museum of Modern Art.